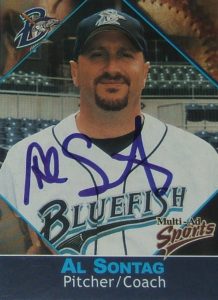 A current Manhasset resident, Al Sontag is a graduate of Plainedge High School in North Massapequa where he lettered in several sports. He went on to Indian River College in Florida, where he was drafted twice by the Baltimore Orioles in 1983 before being drafted in the first round by the Minnesota Twins in 1984.

He is an 18-year veteran and has had the opportunity to play with several other organizations including the St. Louis Cardinals and the California Angels.

Al has also been a minor league pitching coach and manager. Over the years he has been involved in the local community, teaching individual instructions, clinics, baseball camps and multi-sport camps.

Al’s ability to work with children and his commitment to the improvement of athletes of all ages is incomparable.